As we often do, here’s a curated article that was really fascinating to me as a self-proclaimed introvert. This was originally published by The Hustle on July 15, 2018 – National Ice Cream Day – not that it has anything to do with this. Hope you find it as fascinating as I did.

For decades, introverts have been written off as ineffective and incapable business leaders. Here’s why that’s utter BS.

BY ZACHARY CROCKETT @ The Hustle

A myth has pervaded the business world for far too long: introverts aren’t cut out to be leaders.

Some 65% of senior execs see introversion as a “barrier to leadership,” and only 6% think introverts have what it takes to oversee a successful team. Many businesses have a singular vision for what a good leader should be (outgoing, gregarious, an expert networker) and write off introversion as some kind of social “pathology.”

This is complete nonsense.

We talked to more than a dozen successful introvert founders, and read through 3 decades’ worth of leadership studies to explain why.

What is an introvert?

First categorized by Carl Jung in the 1920s, an introvert is most commonly defined as someone who gets his or her energy from alone time rather than socializing.

Unlike their extrovert counterparts (who get energy from other people), introverts are typically introspective, quiet (but not necessarily shy), and observant. 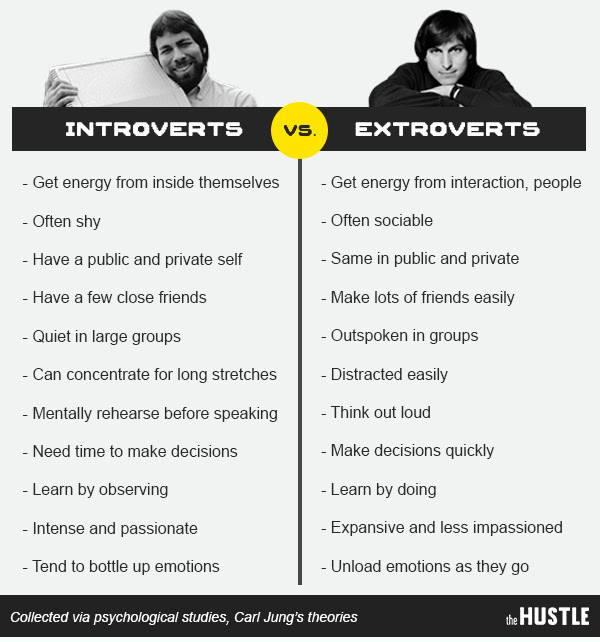 Introverts and extroverts may seem like polar opposites on paper, but there is often overlap — and nobody falls purely in either camp (The Hustle)

Of course, introverts define themselves in many different ways:

Nobody is a pure introvert or extrovert (most are in-betweeners, or “ambiverts”). But in general, it is estimated that 33%-50% of the population skews introverted.

Yet, in the business world — especially among leaders — this isn’t the case: 96% of high-level execs identify as extroverts, and there is a strong, scientifically-proven bias against candidates who fall on the other end of the spectrum. In studies, extroversion is consistently ranked as the most important trait a leader can have.

This has a lot to do with how we’ve historically thought about leadership.

In the most basic sense, leadership is “the process of influencing others in a manner that enhances their contribution to the realization of group goals.”

At some point, our perception of a “good” leader shifted from someone who encourages collective success to a singular, charismatic titan: an outward spokesman more interested in public perception than team building.

Hundreds of studies over more than a century have attempted to identify what makes a good leader — including one that asked more than 300k business leaders to rank their top traits. The consensus: 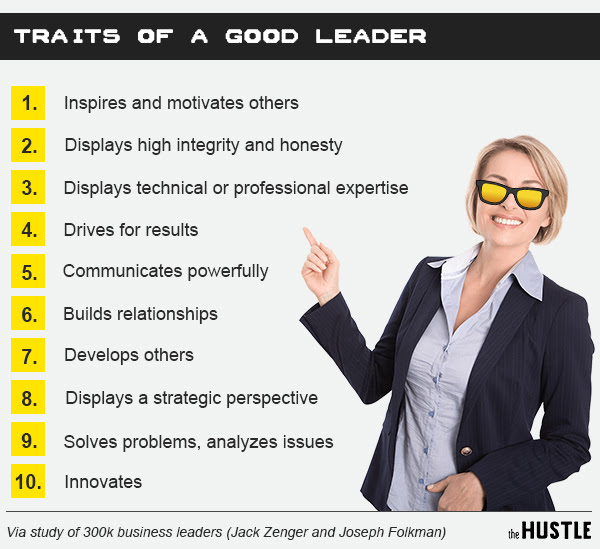 None of these traits seem at odds with the nature of introverts — so why are people so opposed to hiring them into leadership roles?

One of the pervading myths about introverts is that they simply don’t want to be leaders. That’s not the case.

Introverts have emerged as leaders in every arena: Michael Jordan, an introvert, is arguably the biggest sports star in history; Audrey Hepburn was one of Hollywood’s most prominent leading actresses; Mahatma Gandhi led one of the largest revolutions in Indian history.

One-quarter of all US Presidents — including Thomas Jefferson, Abe Lincoln, and Barack Obama — were self-identified introverts of varying degree.

In the business world, some of the most successful founders, inventors, investors, and technologists are introverts, including the likes of Bill Gates, Warren Buffett, and Mark Zuckerberg. 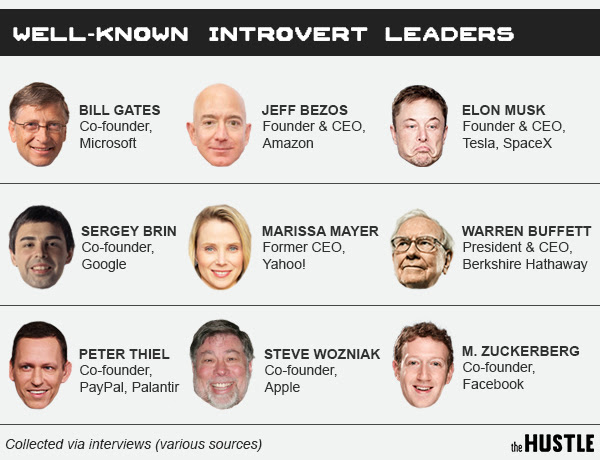 That’s a whole lot of billionaires… (The Hustle)

“I think introverts can do quite well,” Bill Gates said in a speech a few years ago. “If you’re clever, you can learn to get the benefits of being an introvert.”

As it turns out, many of the introvert traits that the business world considers to be detrimental and negative can actually be tremendous strengths in a leadership capacity.

Myth #2: Introverts don’t have the “people skills” to lead

Many business professionals associate “people skills” with “charisma,” and charisma with effective leadership. There are a few problems with that.

Recently, researchers analyzed a database of 17k execs, and found that, while a charismatic person was more than 2x as likely to be hired as a CEO, this didn’t correlate with a better performance once they were hired. In the same study, introverted leaders far outperformed expectations.

Introverts experience more blood flow to the frontal lobes and thalamus — areas of the brain that deal with internal processing and problem solving. This offers them a leg up in working through complex personal situations on small teams.

It’s easy to misinterpret an introvert’s internal processing as disinterest. But in reality, most introverts are just methodical thinkers.

“I’ll spend a lot of time going over scenarios in my head before actually saying or doing anything,” says John Sherwin, CEO of the pharmaceutical startup, Hydrant. “It’s rare that I put a completely unfiltered thought or plan out in the open.” 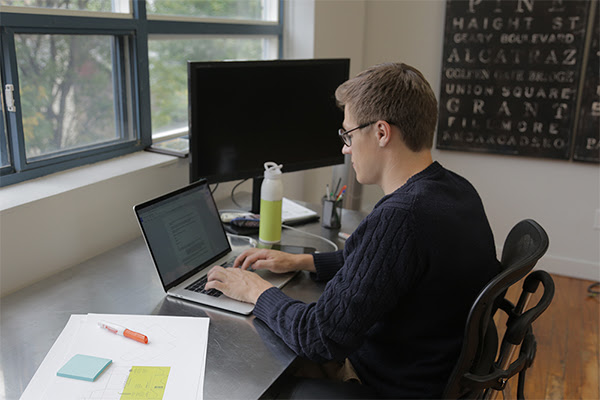 John Sherwin, CEO of pharmaceutical startup, Hydrant, and a self-proclaimed introvert, works at his desk (via Hydrant)

“I tend to let other people talk, really listen to what they’re saying, then come in with less words that are more powerful,” adds Kevin Pasco, co-founder of Nested Naturals, one of the best-selling natural supplement brands on Amazon.

This way of communicating can actually be beneficial in a leadership capacity.

Research has shown that introverts use more concrete, precise language when describing things. They may take longer to contribute, but when they do speak up, they make sure their contributions are well-developed and valuable.

While introverts generally prefer to work alone, they also excel in working toward a collaborative goal — especially in a dynamic, unpredictable environment like a start-up.

A Harvard study found that, while extroverts excelled at leading passive teams (employees who simply follow commands), they were far less effective in leading “proactive” teams, where everyone contributes ideas.

Introverts are more effective than extroverts in leading proactive teams because they don’t feel threatened by collaborative input, are more receptive to suggestions, and listen more carefully.

In another study, researchers broke 163 students into 56 groups — some led by an introvert, and others by an extrovert — and had the teams fold as many t-shirts as they could in 10 minutes. They concluded that teams led by the introverts were also up to 28% more productive. 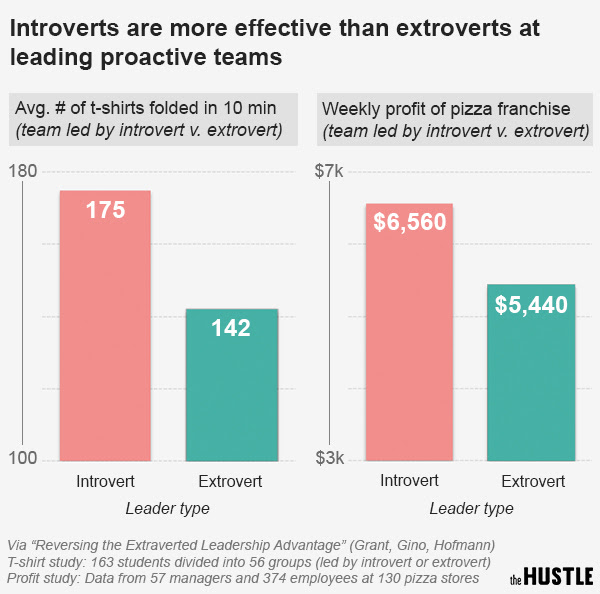 As an introvert, it’s easy to feel as if the very foundations of business leadership are engineered against you — especially considering that today’s tech lords (Bezos, Zuckerberg, Musk) are as much celebrity as CEO.

But introverts have unique personality traits that can empower them to be exceptional leaders if properly leveraged.

We asked successful introvert founders to share some techniques they’ve used to harness the power of their introversion. Here’s a selection of what they said:

“For many years, I thought there was something wrong with me,” the CEO of a shipping logistics company told us. “I’d think, ‘Why can’t I be the guy at the conference who makes the rounds and befriends everyone in the room?’”

“At one event, I just said ‘f**k it,’ and went to go find a quiet place to work on my laptop. It was on that day, in that quiet corner, that I came up with the idea for my company.”

Are you done with web developers, marketers, and media people making everything seem mysterious and out of reach? We are, too. The team at the Wholesum Agency will break it down for you and make honest (sometimes blunt) recommendations that are designed to get results for you and your company. Period. Give us a call to find out more. (541) 516-0041